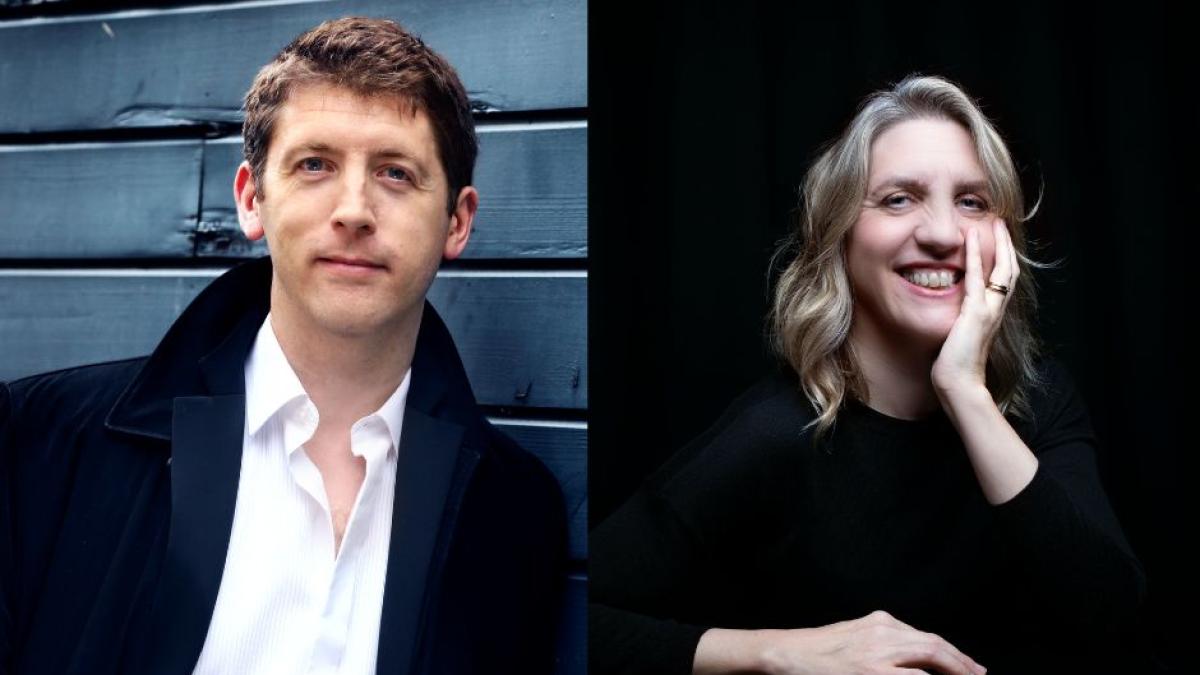 £5 tickets available for those in need

We are delighted to welcome Finghin Collins back to Portico, this time in the company of his sister Dearbhla Collins.

The siblings' programme includes the world premiere of Sean Doherty’s new work Sonatina for two pianos. The piece is a response to Joan Trimble’s work of the same title from 1938 (which also features in the concert programme) and is in three movements: Prelude and Fugue, Variations and Impromptu.

The programme will also include two pillars of the piano duet repertoire with the Dublin siblings performing at one piano - Schubert’s hauntingly beautiful Fantasie in F minor and Ravel’s Mother Goose Suite, famously composed for the children of the composer’s friends.

Dearbhla Collins is one of Ireland’s finest musicians. In addition to her accomplished career as a soloist, the prize winning pianist is a regular chamber music partner to many internationally renowned singers as well as Ireland’s leading artists.

Vocal coach at the Royal Irish Academy of Music, Dublin, Dearbhla Collins is also Head of Artistic Administration at the National Opera Studio in London.  Since 2005, she has been the Executive Artistic Director of the Veronica Dunne International Singing Competition in Dublin.

She is highly regarded internationally as a song pianist; performances include concerts with sopranos Juliane Banse, Anna Devin and Fatma Said; mezzo-sopranos Tara Erraught, Rachel Kelly, Ann Murray and the late Bernadette Greevy; tenors Dean Power, Paul McNamara and Mark Padmore; baritones Benjamin Appl and Will Thomas. These performances include recitals throughout Ireland, the UK and Europe. She has also toured the US with Tara Erraught and given masterclasses and recitals in Beijing, Shanghai and Wuhan in China.

Dearbhla was the moving force behind the 2003 Dublin Hugo Wolf Festival, when under her artistic direction the complete songs of the Austrian composer were performed for the first time in Ireland. Other notable projects under her direction include the acclaimed performance of the three operas known as the “Irish Ring” at the Royal Dublin Society, for whom she was opera consultant. She also founded the Dublin Song Series in 2013 and continues to curate it in partnership with the National Concert Hall and the Hugh Lane Gallery.

Find out more at DearbhlaCollins.com

One of Ireland's most celebrated musicians and significant musical ambassadors, Finghin Collins was born in Dublin in 1977 and, following initial lessons with his sister Mary, studied piano at the Royal Irish Academy of Music with John O'Conor and at the Geneva Conservatoire with Dominique Merlet.  His international career was launched by winning first prize at the Clara Haskil Competition in Switzerland in 1999. He has performed in recital and with major orchestras throughout Europe and the United States, as well as in the Far East and Australia.

Engagements in 2020 included solo, chamber and concerto performances of Beethoven across Europe to mark the composer’s 250thanniversary, as well as his début with the Russian National Orchestra in Moscow, although most of these engagements had to be cancelled or postponed due to the coronavirus pandemic.  When online activities resumed in Autumn 2020, Collins performed throughout Ireland, in Galway, Kilkenny, Limerick, Dublin, Drogheda, Belfast, Wexford Festival Opera, Killaloe Music Festival and Cork, as well as play-directing concertos by Haydn and Mozart with the RTÉ National Symphony Orchestra.

Since live concerts recommenced during the summer of 2021, Collins has performed at the Wigmore Hall in London and at other venues in the UK and Switzerland; he was also a member of the jury of the Clara Haskil Competition. This Autumn he will perform at Music in Monkstown Festival, Galway International Arts Festival, Music for Galway’s 40thSeason Gala Concert, the New Ross Piano Festival and the London Piano Festival before embarking on a 17-concert solo recital tour of Ireland. The 2021/22 season also includes engagements in France, Germany, Switzerland, the UK and more.

In October 2017, the National University of Ireland conferred on him an honorary Degree of Doctor of Music.

Find out more at FinghinCollins.com