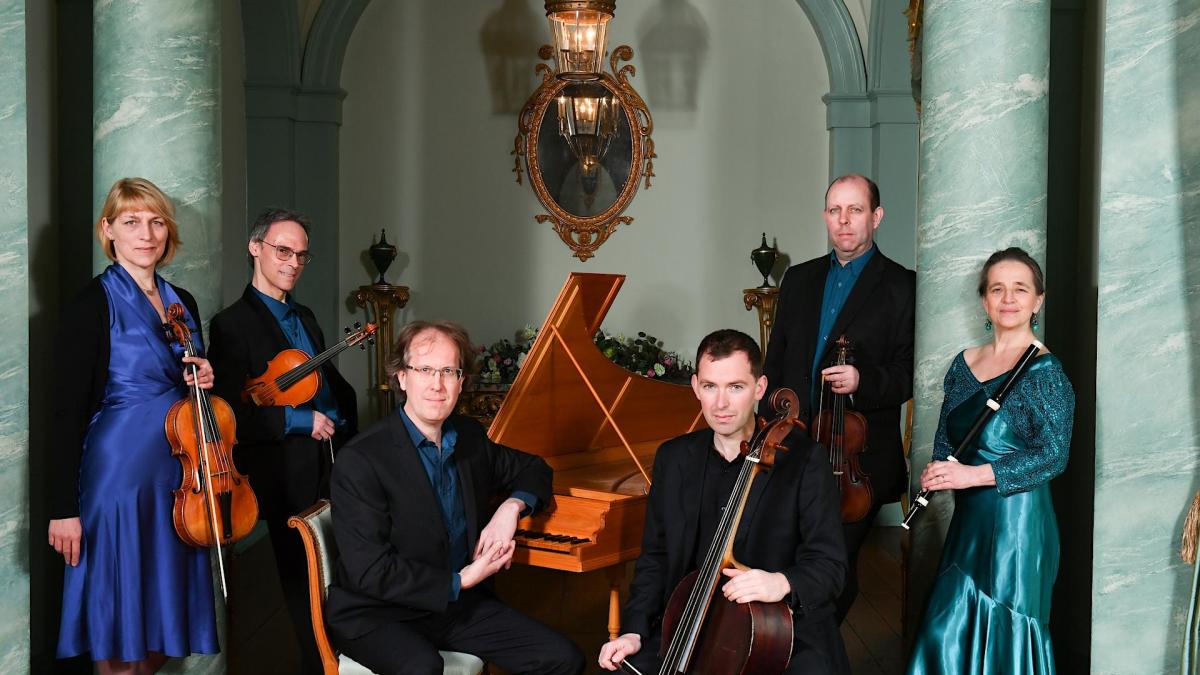 £5 tickets available for those who need them - no questions asked

We are thrilled to welcome the internationally renowned London Handel Players to Portico.

From the exotic allure of the orient, the wild rituals of the Moors and Native Americans to the rugged hornpipes of the English and the captivating melancholy of Scottish ballads, folk songs and dances have long held a fascination to the ears of the European musicians. The London Handel Players bring together a wide selection of this rarely-heard music by composers such as Telemann, Vivaldi, Schmelzer, Purcell, Matteis and Rameau.

France and the fascination for lands afar

Corrette Les Sauvages from Concerto Comique No.25 in G minor

Spices of the Orient, Spanish folly and curiosities from the Canaries

From the far-flung corners of the Earth - the British Isles

Matteis Ground after the Scotch Humour

Purcell Hornpipes from Ayres for the Theatre, ‘The Married Beau’

Scottish tunes medley in A minor/major

Many composers of the baroque period were fascinated by the music and culture of foreign lands and this programme brings together examples that demonstrate the huge variety of styles and influences available to them.

This eclectic programme begins in France with a grand yet satirical show of pomp and ceremony in which Lully conjures up the allure of Turkish royalty for Molière’s upwardly aspirational ‘Bourgeois Gentilhomme’.

There follows Corrette’s arrangement of Rameau’s Danse des Sauvages from Les Indes Galantes inspired by the spectacle of six Native American chiefs in Paris in 1725 and a bizarre and almost hypnotic country dance (Contredanse from Rameau’s Les Borèades) which exploits grotesque intervals.

To Poland next, where the the proud spirit of a nation long under foreign rule found freedom of expression in its rich musical heritage. The pungent drones of bagpipes, and the ‘barbaric beauty’ of the music of the gypsies provided Telemann with 'enough ideas for a lifetime of composition’.

Vivaldi’s recently discovered flute concerto, Il Gran Mogol, which is thought to have been written for the visit of an Indian delegation to Venice, evokes the sultry heat of the Orient, whilst Corelli’s intensely passionate depiction of frenzied madness seizes on a captivating Spanish traditional melody played over the famous Follia ground.

This wild and flamboyant hispanic character was captured by another Italian, Domenico Scarlatti, in his virtuosic harpsichord sonata in A major, composed for Maria Bárbara de Bragança, a Portuguese princess who became queen of Spain.

The earliest Europeans to land on the Canary Islands were astonished to discover a civilisation rooted in the stone age. Their customs may have seemed primitive, yet their vibrant and rhythmically complex music, replete with striking syncopations and sesquialtera (changes of time signature) held a magnetic appeal for guitarists such as Gaspar Sanz and Santiago de Murcia.

Finally we round off our folk-inspired programme with music which to European ears sounded as if it had emanated from alien territory, the British Isles! Mattheson considered the English hornpipes so untamed and unpredictable that they 'might have been composed by the court composers of the North or South Pole”! Immigrant musicians such as Nicola Matteis and later Handel embraced this earthy musical heritage, of which Henry Purcell embodied the pinnacle of achievement.

With the advent of widespread publishing, many Scottish tunes, which had hitherto always been passed on by aural tradition, became widely available to the general public and composers such as Barsanti, Geminiani and even Haydn and Beethoven cultivated the fashion of composing variations on these hauntingly beautiful and invigorating melodies.

About the London Handel Players

For over twenty years, since making their debut at Handel’s parish church, St. George’s Hanover Square, as part of the London Handel Festival in 2000, the London Handel Players have thrilled audiences across the world with their performances and recordings. They appear regularly at Wigmore Hall and at many of the leading festivals in the UK, Europe and North America, performing baroque chamber music and concertos and collaborating with the world's greatest singers. They have performed across Canada and the United States, making their New York debut at the Frick Museum in 2012 and returning to perform at Carnegie Hall in 2014. Their recent appearances include Spitalfields, London Handel, Tilford Bach, Cork Early Music, Göttingen International Handel, Gregynog, Kings Lynn, Stratford, Newbury Spring, Stour, Halle International Handel, York Early Music and Brighton Early Music Festivals.

The members of the group pursue busy solo, directing and conducting careers, work with many of the major early-instrument ensembles in the UK and abroad and are professors at the conservatoires in London. They bring together a wealth of recording experience and their four Handel recordings, of his Op.2 and Op.5 trio sonatas, his complete violin sonatas and one entitled “Handel at Home”, all for Somm, have been highly acclaimed. A further double CD, of the complete Sonatas Opus 1 by Francesco Geminiani, was released in December 2012 and their new double disc of Bach Flute Sonatas and Arias was released in January 2016. They also appear frequently on BBC Radio 3.

Committed teachers at every level, the London Handel Players present masterclasses and workshops for students, keen amateurs and children, including an annual project with schools in conjunction with the Handel House Museum and the London Handel Festival.